Today’s date on the Archangelic Calendar is:

The day is now 36 hours and starts and ends at 3AM or 3PM in an alternating fashion. At the time of this post, the following 3AM (local) will start this new day.

– Gaia is in a pure air dominant form, and we are feeling it in every sense of the word. Not only are we going to see this on a global scale but also on a very personal level as well. These changes may be rocky, but it will truly be a blessing in its purest form.

– There are more new starships previewing in the sky than one could have imagined being in existence. The variety being displayed is so vast and eclectic that it would take a great deal of effort to decipher who is who at the present moment. The next time the star races wish to show off their ships please give us an advanced warning so we can have our cameras and programs ready. We are also awaiting a giant flyby as well, so keep your eyes peeled to the skies.

– You can not battle a dimension that is above your consciousness. That being said there is a fully realized omnipotent force of divinity, of which is becoming more and more physical and influential each and every moment.

– There was an independent force (from our legions) that has taken out the cloaking systems for various malevolent star beings inhabiting Earth. Many being’s true form will be revealing itself momentarily because of this. This is a relatively new group that has no main planet to claim as a residence.

– As a collective, it is time to restore honor to humanity. While humans argue semantics, malevolent star races lick their lips. Most wars are won and lost in propaganda, it is time to change the vernacular. It is up to the lightworkers to shine virtue, morality, and the power of the divinity to the forefront of humanity.

– The general intelligence of the up and coming generation has far out-weighed those who came before them. The changes that have taken place over the last 30 years can not be discounted, the internet has created a new world that the old guard is clearly getting lost within. The old guard must realize it’s time to step down and bring forth a new guard who is more in touch with today’s humanity. This statement transcends all industries, groups, boundaries, and ideologies.

– Ascension symptoms are at an all-time high. Don’t be alarmed if you or earth starts shaking without any warning. Its a perfectly normal response to the electric plasma coming in from the sun that is taking form as sacred geometric patterns. This why the Schumann resonance spikes and the dramatic images from the sun are so plentiful at the moment. Archangel Zophiel says that at least some of the Schumann spike is being artificially produced, but that does not take away from the fact that downloads are at an all-time high.

– The drop in cosmic pressure that we have just experienced was palatable. This also coincided with a new macro timeline that seemingly appeared out of nowhere and manifested in our dreams.

– There are technologies that read the impulse of thoughts, while this may seem like the science fiction of secret projects, it is simply the very receptive quartz crystal located in all of your technologies processors. Given the awful public relations the tech industry has received lately, it would be wise to investigate the safety of many things that we have taken for granted as safe.

This is not to mention the publicly announced agenda to inject everyone with an RF chip, to which the people of Earth had said NO to, time and time again. This infraction will not be allowed, not by the hands of the legions, but by the hands of humankind globally. It is almost as if the people behind this agenda, are trying to die by an angry mob, and I must insist that this road is not to be taken. As that is exactly what they want, to be sacrificed by the hand of the light and restore their powers in their next lifetime.

– The advice of refraining from civil unrest is greatly encouraged, this does not include peaceful protests and speaking up for what you believe in, it simply means keep all communications peaceful. Even if a strong disagreement ensues, composure must be evoked at all times. Belligerent communication is a very ineffective way to get things accomplished in our modern society.
– David Wilcock is being targeted by malevolent star beings who are trying to walk into his body, please help David battle the many unseen forces going after him at the moment. We like David how he was, and our daily metaphysical tools will help our friend out very effectively.

– There is clearly a foreign influence infecting the actions of many government leaders, we must be sure to protect those in positions of decision, with metaphysical tools. If it is not needed, it will just bless them in an extremely positive way, if it is necessary they get a headache and their soul back.

“We do not inherit the earth from our ancestors we borrow it from our children.” – Chief Seattle 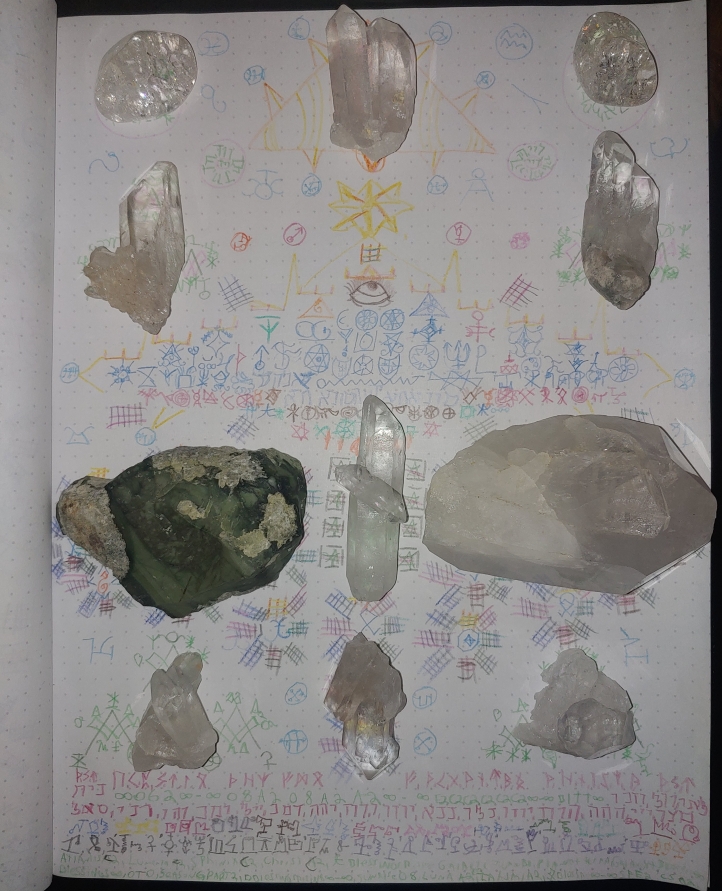 Today’s Tools will be active until the next post, we can no longer allow the metaphysical tools to be open-ended, yield wisely.

Use the legend below to help you decipher how to best use the today’s weapons.
(Passive) = No intention needed to use or arm. It will work on its own when you accept its presence. All you need to do is give permission and it will work on your behalf. (Active) = Intention Needed to use (Aggressive) = Will attack before anything has a chance to do any harm to you, beyond space and time.

We have gone through great changes and thus the weapon-based tools indicated below can be inserted into the ground to call forth downloads.

(Active, Passive and Aggressive anywhere within the universe)
The Violet Flame team is in the set of 9, whew!

(Active)
Archangel Michael’s legendary sword can handle anything, as it is completely omnipotent, no level of consciousness can be achieved that this couldn’t slice through. It is also an amazing weapon against electronics and technology as it can override any circuitry.

( Passive, Active and Aggressive)
Archangel Issac’s Radiant field looks a lot like Magnetos forcefield and it reacts to any life form with either loving energy, or a with transmutation-al blast of vast power.

(Passive and Aggressive)
Archangel Leo’s Swords of plenty is a passive and aggressive attack sword that has a complete will of its own. Do not try to yield at all, you will only get in the way, equip and go.

(Passive and Aggressive)
Archangel Shepard’s orb is a presence of divinity that allows anyone that you are engaged with a clear path to forgiveness or a direct audience with infinitely expanding creator source on the matter. This is a truly compassionate tool of divine orchestration.

(Active)
Archangel ZagZagel’s staff of heavenly might rains large crystal masses upon a targeted area. Great for large targets, works on the physical and nonphysical as well.

(Active)
Archangel Tzedekiel’s staff of justice is a tool that is best used on a Macro level and can help move things along that are stagnant. It can also summon and maintain force fields for protection purposes

PLEASE Note the next 3 tools are meant to be used in combination. They are sent to us to help us sustain our physical bodies. Please keep using this tool daily” we are starting to remove the energy blockages surrounding abundance.

If you need help using the below tools. Envision gold bars Using Archangel Ariel’s Wand and set it on fire using Archangel Nasaragiel’s and Archangel Israfil’s Swords. I say envision Gold because Gaia controls gold and cash money, well ya know that story. Also, the galactic federation trades in gold and manifesting in this method also aligns with their currency methods and any divinity based currency system.

(Active)
Archangel Ariel’s wand of comforts, helps you summon any necessity you may have. It is a wonderful and comforting tool when equipped.

(Active, Aggressive and Passive Long and Short Range)
Archangel Israfil’s Flaming Sword can protect you against all things directed to you on a Macro or Micro Scale. It can also speed up the time in which something you wish to manifest will come to fruition.

(Active, Aggressive and Passive Long and Short Range)
Archangel Nasaragiel’s Flaming Sword can bring any negative energy to its knees. It also has the ability to remove any and all obstacles that are in the way of something that you wish to manifest.

PLEASE NOTE the next 3 tools are healing modalities and can be sent remotely to loved ones.

(Passive and Aggressive Short Range)
Archangel Kaleziel’s radiant rays of health, wards off all diseases and illness. It can also aid in the recovery of diseases already inflicted, it can be sent to land masses as well as individual living beings.

(Passive and Aggressive Short and Long Range)
Archangel Theliel’s radiant compassion sends heartfelt love to all within your jurisdictions. This is the nurturing aspect of healing and is and it has incredible warmth. It is best to yield this with a calm frame of mind.

(Active)
Archangel Raphael’s healing staff is an omnipotent healing force that works gradually or intensively depending on how you yield it. It is considered the best general healing instrument.

Assignments:
These assignments are valid any day, as we are beyond space and time, and it still remains collaborative effort no matter when you administer them. Although to ensure accuracy, make sure you are using today’s current weaponry. Especially, if you are seeing this 36 or more hours after this was originally posted, please use your intuition.

1) Emerald Green Plasma is being called for by some of the most profound aspects of the universe. This call has clearly been received by all aspects of our legions and a MAJOR healing campaign is about to begin. The targets are the earths land masses, waters and airs at the moment. Emerald green plasma is very receptive and we need an element of compassion to exude from this plasma as well. Hold for a 72 count for each target. Then please engulf earth with rainbow plasma for a 72 count as well.

2) Take a quick scan of all government leaders, it does not matter your opinion of them, if they are infected with a harmful soul, like them or not, this helps all of humanity. It would be wise for us to keep this on our daily task sheet. We are in a complicated world as is, removing harmful entities form any human can only help humanity.

3) A very large siphoning event has just ended, we must replace the thwarted energy with pure love. Summon forth the following lights to come through your vessel and allow it to flow directly into the heart of Gaia:

Today’s Meditation is designed to bring forth a euphoric world of co-creation.