Natural Miracles, Timeline Target Achieved, We Will Be Shifting Shortly

The day is now 36 hours and starts and ends at 3 AM or 3 PM in an alternating fashion.

The launch time of this post is the 8:08 morning gate; on the 3D date 73120, the following 3:PM will start this new day. Simply follow this parallel around the globe until it hits your local time at three.

If you are conscious that a new day has begun, it is customary to send love and kindness to someone.

Today’s date on the Archangelic Calendar is:

– Gaia is in the element of “Spirit,” and thus completeness has entered the ether. We jumped timelines like a champion, and the results were very immediate, and this is precisely the sentiment Gaia took with her into the element of “Spirit” today. Although it was not before a long conversation about the upcoming days.

She wished for us to know that she will be assisting us when we need assistance the most. I was given an idea as to what that meant, and the best way to describe it would be “Natural Miracles.” She went on to say that the plants, animals, and mythical beings will be acting in a way never before seen and endowed with new abilities.

– We have many common sayings that give our power away, such as “it is what it is,” “you can only do so much,” and “all we can do is hope for the best.” These notions and ideologies need to purge from our collective psyche. We are not powerless observers; we are powerful beings with the power and knowhow to engineer universes.

The Lightworker Legion has proven to themselves that they are powerful beings beyond measure. It is well within our power to change things, and the fact that “Infinitely Expanding Creator Source” insists that we do so, puts an exclamation point on that statement. Divinity has repeated time and time; we are the answer to their prayers. The prayers of humanity have requested divine intervention. This intervention will come through the eyes of those who are reading this.

– We have had fantastic success moving to a higher timeline, from what we gather we are going to pick up some lightworkers here and choose to shift again. The fact that our legions are so comfortable working in this environment is paying off more than anyone could have imagined. If we were not so at ease with quantum engineering’s weirdness, our efforts would not be so useful.

– Our legions have innate macro shielding, grounding, tools, and enhancements attached to their inclusion. Today, we have implemented a very thick armor, only because we have gone to an unfamiliar timeline. We always hold precautions but see absolutely no reason for alarm.

– Go as hard as healing as you do anything else that is important to you. If you wanted to do 1,000 pushups, you would make daily strides to do so. A commitment to success is essential for any goal. If your main desire is not on your mind frequently, the many steps it would take to accomplish that goal will not present themselves. In achieving goals containing momentum, it is not one massive thing that you do correctly, its many small things.

– The day is shifting to 72 hours when we cross the galactic reset point, which hasn’t happened yet and is why you didn’t feel that shift. The calculations are off on the 3D timelines; their mathematics does not account for other aspects of the 5D schedules. Sooner or later, the gifted will realize they are not in Kansas anymore and will adjust their numbers. Remember, not everyone has the benefit of this calendar. Be ready for the shift to 72 hours; it will radiate on every layer of your being. The logistics of this is of a purely engineering nature and will further the separation between 3D and 5D.

– After a relatively mild space climate, the space atmosphere and ultimately “The Schumann Resonance” is about to go back up. You can keep an eye out for symbols, but for the most part, it is just going to be an intense blast of profound energy.

– A triggered response is something that someone firmly rooted in 3D will t do unconsciously. For example, you will say how are those french fries, and they will give you a response as if they were on the food network. They may not realize this, but they react in that manner that they have observed most often. In the same way, many are experiencing the mass fear tactics presented on MSM.

– I think we were pretty clear in saying there aren’t many timelines that do not have extreme chaos around “The US election.” The Baron Trump book is no coincidence; the status of anything organized is under a real threat.

– Electronics are going to go whacky for many reasons, but mostly because the internet has not reached a point where it can cut through alternative realities. Still, this technology does exist on higher dimensional physicalities. The advancements I am referring to, allow you to send data throughout time, be it forward, backward, or sideways. 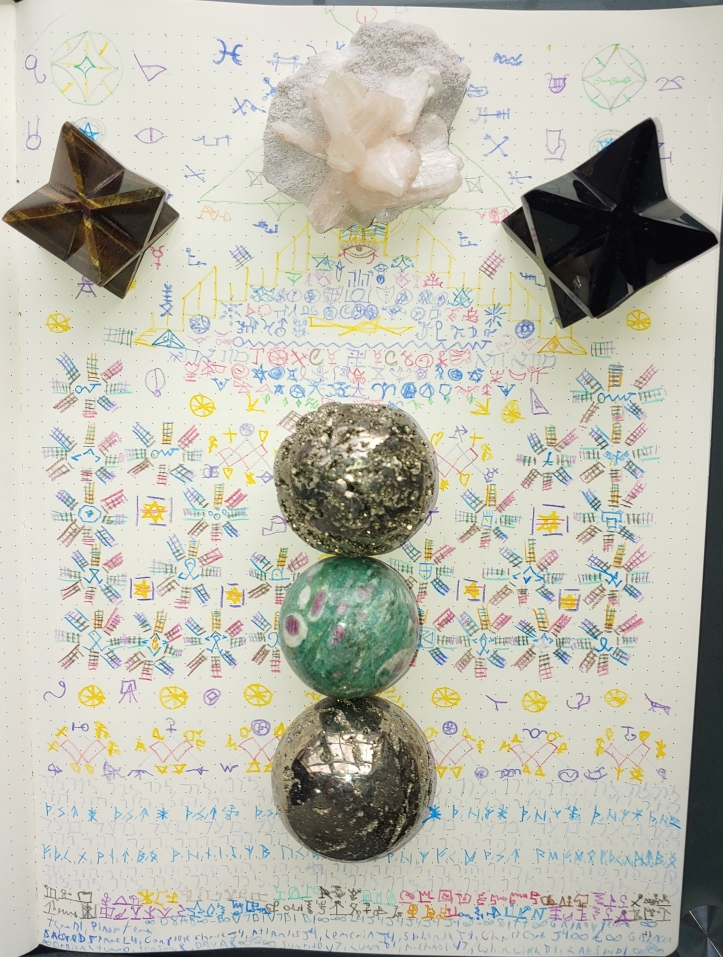 Use the legend below to help you decipher how to best use today’s weapons.

(Passive) = No intention needed to use or arm. It will work on its own when you accept its presence. All you need to do is give permission, and it will work on your behalf.

(Active) = intention Needed to use

(Aggressive) = Will attack before anything has a chance to harm you.

We have gone through significant changes, and thus the weapon-based tools indicated below can be inserted into the ground to call forth downloads.

The “Violet Flame” is in the ideal nine settings; this means that we are in a perfect setting to transmute dense energies.

Archangel Michael’s legendary sword can handle anything, as it is entirely omnipotent, no level of consciousness can block this divine weapon. It is also a fantastic weapon against electronics and technology as it can override any circuitry.

Archangel Issac’s Radiant field looks a lot like Magnetos forcefield, and it reacts to any life form with either loving energy or a transmutation-al blast of vast power.

Archangel Leo’s Swords of plenty is a passive and aggressive attack sword with a complete will. Do not try to wield at all; you will only get in the way, equip and go.

Archangel Sorush’s sword of transmutation is only for evil energies. A tool that is far too powerful to wield lightly; this can handle the worst of the worst.

Archangel Dubbiel’s staff of bear medicine can heal all natural things. This staff is also a powerful ally against all items that may obstruct you.

Chayyliel’s Horn summons an army of unimaginable power to your location. It is a hypersensitive tool, and it will adapt to current events in your life and on a global scale as well.

Archangel Shepard’s orb is a presence of divinity that allows your target a clear path to forgiveness or a direct audience with infinitely expanding creator source on the matter. This tool is a compassionate tool of divine orchestration.

Archangel ZagZagel’s staff of heavenly might rains large crystal masses upon a targeted area. Great for large targets, works on the physical and nonphysical as well.

Archangel Tzedekiel’s staff of justice is a tool that is best used on a Macro level and can help move things along that are stagnant. It can also summon and maintain force fields for protection purposes.

PLEASE Note the following three tools work cooperatively. They are sent to us to help us sustain our physical bodies.

Archangel Ariel’s wand of comforts, helps you summon any necessity you may have. It is a beautiful and comforting tool when equipped.

Archangel Israfil’s Flaming Sword can protect you against all things directed to you on a Macro or Micro Scale. It can also speed up the time in which something you wish to manifest will come to fruition.

Archangel Nasaragiel’s Flaming Sword can bring any negative energy to its knees. It also can remove all obstacles in the way of something you wish to manifest.

We are still working on a macro level, and thus the format will stay consistent, please use today’s current tools if you need assistance performing the tasks below. Nothing is requiring you to do the following, if you are ready, your higher self will call you to duty, if not, then skip to the Meditation.

* There are subconscious impulses that run through every DNA strand, and as one would imagine. These things can vary from nervous ticks, visions, or disease, but these traits are much more evil in the Blood Lines of “Organized Darkness Royalty.”

To stop this subconscious evil, we will implement the following. These impulses look like lightning energy lines; each person has two strings attached: “Dark Grey” and “Gold.” Destroy the bloodlines’ desires with a swift metaphysical sword strike to the “Grey” and destroy the influence they have on humanity by doing the same on the “Gold.” Then you are free to go after the black cube with sword and shield, and if you are wondering where to find this cube, it is the very photographic craft behind our sun.

* As mentioned, we moved through the portal that we created very fast, and Archangel Raphael has recommended using heavy downloads at this juncture. The first download that we will implement will be for those on the lower timelines; we will engulf the Earth in bright orange plasma, it will help encourage knowledge.

The second will be “Emerald Green Plasma” to promote healing, and the final will be “Rainbow Plasma” for general use. Please hold them all for a 72 count.

* While speaking to Gaia today, she mentioned that we have only just begun working with her properly. She is very excited about the notion of organized interactive efforts between herself and the legions. She is in the “Spirit” element, and thus we can anchor her efforts to awaken more.

Vibrate the inner Earth with “Teal” energy waves, followed by “Orange” and “Green,” hold each for a 72 count. Then, Summon galactic healing by radiating the same energy waves in an indigo orientation.

* World Leaders think they are going to play war games like its a game of poker. Our galactic neighbors have made it abundantly clear that nuclear attacks will not fly as it affects the entire galaxy.

Luckily, there is a plasma putty available for such things, allow this brownish slow-moving plasma to get into every nook and cranny of all nuclear warheads. There are an estimated 14,000 atomic bombs on planet earth, drench them all, saturate their circuitry.

The other part of this is that if we put a platinum infinity symbol on the bombs. In this way, we can show these destructive tools to our galactic family for safe disposal.

Create an exit portal to “The large barren planets of Alpha Centauri” “from the magnetic north pole of Earth, then implement a rainbow breeze that will flush out any chemical, viral, bacterial, or microbial warfare, and sweep it into the exit portal.

Today’s Meditation is below; Please Enjoy!